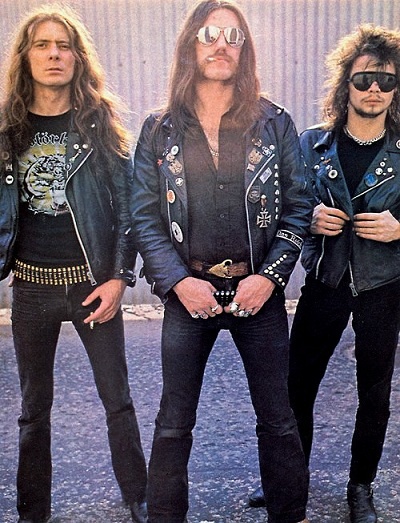 Well, he’s been a constant in my musical life since I was 16 and saw Motorhead supporting Hawkwind at the Music Machine in London with my best mate at the time , Mick Fox and now after all those years of living fast and loose and living to win, he’s gone.

There’s been lots in the papers about his life so I won’t add to those, suffice to say that when I bumped into Lemmy as a callow youth at a gig, he was happy to shake my hand and chat briefly. They always said he had time for his fans and was a genuinely humble man. That was my experience.

I saw Lemmy and Motorhead live about 15 times, mostly with Fast Eddie and Philthy Phil but in later times with Mikkey Dee and Phil Campbell. My favourite has to be Hammersmith Odeon, 3 rows from the front, ears ringing for 3 days afterwards

Lemmy’s music will always be with me and here’s my top songs in no real order.

My first brush with Lemmy was with Hawkwind and this great song. Stadia eh? what a girl! 6ft 2in !

from Hall of the Mountain Grill in his Hawkwind days. One of his early compositions

Nothing more needs to be said really

The studio album has Lemmy on guitar for the second solo

I said in no particular order but this is probably my true favourite.

from the BBC live sessions. This was always one of my first favourites from the first album

Just great lyrics and fun and a TOTALLY AWESOME TEAR UP!!!

Too late Too late. This live version is done with Metallica. Feel the power!!

from one of the latest albums showing he still had it in him.

Enjoy the vids and enjoy the music.

RIP and thanks for everything.